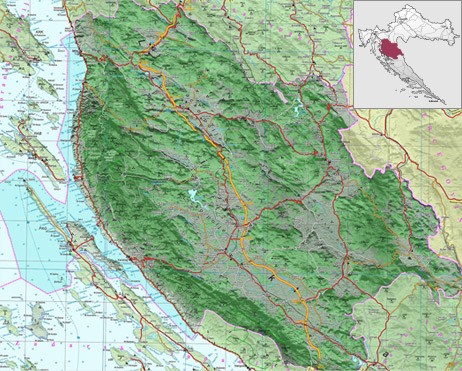 When asked what makes a certain cuisine exquisite, many world-renowned culinary experts will answer by choosing three simple factors: austerity in preparation, respect of tradition and regional characteristics. What is not recognized as exquisite are crowds, excessive decorations and pretentiousness.

Considering the mentioned factors cuisine of the Lika region could, by all means, be considered as first class exquisiteness. This means nothing more than preparing the food like you would "at home", or recognizing the already world spread concept of "cooking home-style". These are meals prepared at home every day using ingredients such as vegetables and seasoning herbs right from one’s own garden (or known local producer), while hare meat, chicken, veal and lamb come from animals bred on family farms.

Many recipes derive from traditional peasant cuisine and they are indigenous to the region that cherishes the tradition and prepares the food “as it was once prepared”. Spit-roasted lamb (on open fire) or meat with various vegetables under the baking lid are only some of the examples of simple meals prepared with love in the traditional way. Every area in the region has its own original recipes using similar or identical ingredients but added to the food in different proportions and in different ways. What is common to all is that the ingredients that are used for cooking are simple, cheap, and easily available in the region differing only in the skill of the cook and their special art of preparation.

Restaurants preparing the food based on the principle of exquisiteness always procure a smile on the face of each guest.

Top 10 dishes you need to try in Lika